Johor is the southern gateway to peninsular Malaysia. It is the third-largest state in West Malaysia with an area of 19,984 sq km. State capital Johor Bahru is linked to Singapore by a 1-km long causeway.

Within the city of Johor Bahru are some of the renowned historic buildings such as the Royal Abu Bakar Museum, Sultan Abu Bakar Mosque, Sultan Ibrahim Building, among others.

The other attractions in the state include the Endau-Rompin National Park famous for its rare flora and fauna species, the mangrove swamps of Tanjung Piai, Kota Tinggi waterfalls, and the 1,276-metre Gunung Ledang.

Off the northeastern coast of Johor are some of the idyllic islands that constitute the Marine Park, namely Pulau Sibu, Pulau Tinggi, Pulau Besar, Pulau Tengah, Pulau Hujong, Pulau Aur, and Pulau Rawa.

Johor Bahru is accessible via the North-South Highway from major towns on Peninsular Malaysia, including Kuala Lumpur. Visitors from Singapore can enter Johor by road and rail via the causeway or through the Second Link from Tuas passing through Gelang Patah.

International visitors can fly in via Kuala Lumpur, Penang, Kota Kinabalu or Kuching to Sultan Ismail Airport outside Johor Bahru. 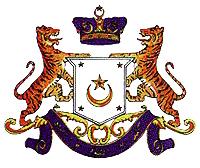 The crown represents the Ruler, while the 4 stars stand for the 4 original Johor districts of the State, namely Johor Bahru, Muar, Batu Pahat, and Endau. The crescent and star symbolize Islam. The two rampant tigers on either side of the shield denote a time when wild animals roamed Johor. The floral decorations below the shield symbolize the original main products of Johor, black pepper, and gambier. The State motto reads “In the Hands of Allah”.

The white crescent and star of five points denote royal sovereignty. The red represents a warrior and the blue represents the universe.

The rise of Johor as political power was precipitated by the downfall of Melaka. Fleeing from the Portuguese invasion of Melaka in 1511, its last sultan, Sultan Mahmud escaped first to Pahang before settling down in Bintang (currently an island of Singapore). Although Mahmud never succeeded in reestablishing his sultanate in Malacca as he had hoped, he became Johor’s first Sultan.

The history of Johor from the late 1500s to the late 1600s is characterized by a series of succession struggles interspersed with strategic alliances struck with regional clans and foreign powers to maintain its political and economic hold in the Straits. In competition with the Achehs of northern Sumatra and the port-kingdom of Malacca under Portuguese rule, Johor engaged prolonged warfare with their rivals, often striking alliances with friendly Malay states and in particular the Dutch. In 1641 Johor in cooperation with the Dutch succeeded in capturing Malacca. By 1660, Johor had become a flourishing entrepôt, although weakening and splintering of the empire in the late seventeenth and eighteenth-century reduced its sovereignty. It would not be until Raffles came to Johor in 1818 that a strong sultanate under Sultan Hussein was instituted.

Modern Johor history began in 1855, when Sultan Ali signed over the entire state of Johor to Dato’ Temenggong Daing Ibrahim, with the exception of the Kesang area (Muar), which was finally handed over in 1877. Temenggong Ibrahim opened up Bandar Tanjung Puteri (later to become Johor’s present-day capital) in south Johor as a major town.

The increased demand for black pepper and gambier in the nineteenth century lead to the opening up of farmlands to the influx of Chinese immigrants, creating Johor’s initial economic base. The Kanguru system was put in place. Under the British Residency system, Sultan Ibrahim, Sultan Abu Bakar’s successor, was forced to accept a British adviser in 1914. D.G. Campbell was dispatched as the first British adviser to Johor.

British administration of Johor lasted until 1941, the year of the Japanese invasion. After the war, from 1945 to 1946, Johor was under the jurisdiction of the British Military Administration.

Malay opposition derailed the Malayan Union plan, and the Malays under Dato’ Onn Jaafar’s leadership formed the United Malays National Organisation (UMNO) on 11 May 1946. The Malay Federation was founded on 1 February 1948, the first step towards independence, and on 31 August 1957, independence was achieved.

Johor is the second largest state in Peninsular Malaysia after Pahang. Johor has great tourist attractions, from resorts, waterfalls, recreation forests, beaches to mosques and historic palaces. There is also the added allure of its traditional music and dances like Tarian Kuda Kepang, Ghazal, and Tarian Zapin. For nature lovers, the countryside and beaches beckon, and for more adventurous tourists, there are scuba diving and jet skiing. Major golf courses also await the avid golfer across this state.