A ceremony was held in July 2000 to mark the start of work on a 57km express rail link between the centre of the Malaysian capital Kuala Lumpur, and the principal international airport. By 2002, this line is expected to be carrying four trains per hour in each direction, offering a city centre to airport journey time of less than 30mins. 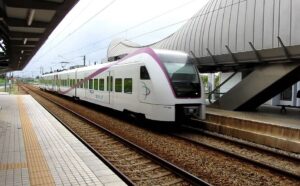 The Express Rail Link (ERL) is a central element in the Malaysian government’s strategy to enhance the role of the capital’s international airport. Its completion will coincide with improvement works at Sentral station, which will integrate the services of the ERL with those of the Commuter Rail Service (CRS), main line and commuter services operated by the KTMB national railway, the PUTRA automated light rail system and the KL Monorail system. Operator Express Rail Link is a private company, owned by Tabung Haji Technologies and YTL Corporation Berhad, which has a 30-year concession to finance, build, operate and maintain the link. The terminal at the airport incorporates full check-in facilities and other airport services.

Click Here for out next article about Malaysia Airline.