Kuala Lumpur literally means “muddy estuary” in Malaysia. It is situated at the confluence of the Klang and the Gombak Rivers. This great city one sees now started out as a tin-mining camp by a group of 87 Chinese settlers, in 1857.

At that time, tin was greatly demanded by the Americans and the British Empire, which needed the durable, lightweight metal to help fuel their industrial revolutions. The prospectors headed for Ampang, located a few kilometers to the east of Kuala Lumpur, as huge reserves of tin ores are found there.

Frank Swettenham, the British Resident of Selangor, chose Kuala Lumpur as his administrative center and oversaw the rebirth of the city, ordering the construction of new buildings using brick. In 1896, Swettenham convinced the Sultans of four states to unite under the umbrella of the Federal Malay States (FMS), and Kuala Lumpur was chosen as the capital.

In 1972, Kuala Lumpur achieved city status. At the same time, it also remained as Selangor’s state capital, a status it attained in 1887. On February 1, 1974, Kuala Lumpur was officially declared as Federal Territory. It also marked the end of Selangor’s jurisdiction over Kuala Lumpur.

The last 20 years have seen Kuala Lumpur undergo phenomenal growth, not to mention development on a monumental scale. The world’s tallest twin buildings, the Petronas Twin Towers, now rise above the city with a two million population.

Getting to Kuala Lumpur is easy with over 40 international airlines including the national carrier Malaysia Airlines, serving the city’s state-of-the-art KL International Airport at Sepang. Domestic routes are served by Air Asia and Pelangi Air, in addition to Malaysia Airlines.

Kuala Lumpur is also easily accessible overland from Thailand in the north and Singapore in the south, while KTM provides easy rail connections to most principal towns in Peninsular Malaysia.

By sea, the main port of call for cruise liners is Port Klang, 41 km from Kuala Lumpur. The city’s strategic location at the heart of southeast Asia, along with its excellent supporting infrastructure, has made it a popular venue for international events, conventions, and exhibitions.

KL Monorail
The KL Monorail is an inner-city public transit system that serves the central business, hotel, and shopping district of Kuala Lumpur. The 8.6km long, dual guideway, straddle-beam elevated monorail system will begin from the Pekeliling Bus Terminal in the north, pass through Kuala Lumpur’s ‘Golden Triangle’ before reaching KL Sentral in Brickfields. Fully elevated with 11 stations, the KL Monorail is capable of handling up to 20,000 passengers per hour per direction, operating at up to 2 minutes headway between trains.

KTM Commuter
The air condition air-conditioned KTM Commuter trains operate in two routes, from Rawang to Port Klang and from Sentul to Seremban. Between those routes, the train will stop by several stations. This is the best transportation if your tour trips start from Kuala Lumpur up to Mines Resort City.

STAR LRT
The STAR LRT system has two line, Sri Petaling to Sentul Timur and Ampang to Sentul Timur. Both line will transit at Chan Sow Lin Station. Every station has signage and a transit system map. From there you can determine your destination station.

Tickets can be bought either from the ticket machine or the ticket counter. Enter the rail system through the automatic gate and wait for a train. Each train will enter the station one every 5 minutes. Feeder bus services are available at any station to the route destinations with a fare of 50 cents per trip.

PUTRA LRT
The LRT System 2 known as PUTRA LRT, covers a total distance of 29 km linking the eastern and western suburbs of Kuala Lumpur servicing some of Kuala Lumpur’s most affluent and heavily populated areas.The total alignment which starts from the Depot in Lembah Subang and ends at Terminal PUTRA in Gombak is 29km in length. The line was divided into two sections; section 1, which is from Lembah Subang Depot to Pasar Seni Station, and Section 2, which is from Pasar Seni Station to Terminal PUTRA.

All trains are fully air-conditioned and provide a service level of 90 seconds during peak hours and between five (5) to ten (10) minutes during off-peak hours. The service is provided from 6.00 am until 12.00 midnight, on Monday – Saturday, and 8.00 a.m. to 11.00 p.m. on Sunday and Public Holidays. Tickets are available at the station ticket counter.

For the convenience of commuters, PUTRA LRT provides a dedicated feeder bus service within a 3-km radius from each station. Bus schedules are posted at major bus stops. The operational hours coincide with the LRT operation hours.

It is recommended for those who wanted to do the city tour to use the LRT and Commuter transportation facility.

Public Cab
Taxi stands are often found beside the bus stops. To take a taxi, just queue up if have to, board the vehicle and announce the destination. The fare is based on distance and the taxi are equipped with fares meter. It’s easy to get a taxi in the city and most of the city public taxis are in red and white color.

Additional charges of RM 1 are a charge for extra luggage put in the boot and if you take a taxi between midnight to 6 am, there will is a 50% surcharge from the fare.

Public Bus
Two main city buses that companies are Intrakota and Cityliner, both are air-conditioned. Others are Metrobus and Len Seng Bus. Their route is to all places in the Klang Valley. It’s easy to get the bus in the city as they will stop at all bus stop in their route.

There will be a number and a destination board in front of the bus, make sure you take the correct bus to ensure you’ll reach your correct destination. Intrakota charges a flat rate of 90 cents per trip while others depend on the location.

The Kuala Lumpur Federal Territory flag comprises 14 alternating white and red stripes divided equally by a field of dark blue. The stripes represent the 13 states and the Federal Territory in the Malaysian Federation. The crescent moon and star are the symbols of Islam, the official religion of the country; dark blue represents the ethnic diversity of Kuala Lumpur. The color white signifies purity and cleanliness, while red stands for courage, and yellow is the color of peace and prosperity. 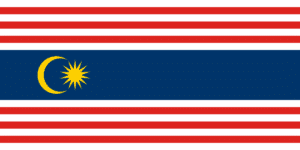 Located at the confluence of the Klang and Gombak Rivers, Kuala Lumpur quickly grew into a settlement for early immigrants engaged in the flourishing tin-mining trade in the hinterland. The town was established in 1857 when a group of Bugis tin-miners led by Raja Abdullah landed here. Later, the arrival of Chinese immigrants attracted by the possibility of making their fortunes in the tin trade brought more development. They were put under the control of Chinese Kapitan or headmen, the most famous of whom is Yap Ah Loy.

In 1870, civil war erupted with the Chinese community being split along partisan lines into the Cantonese Ghee Hin or the Hakka Hai San secret societies. The British were called in to help end the strife but many of the buildings in the settlement were burnt down or severely damaged. The rebuilding of Kuala Lumpur in 1882 is credited to Sir Frank Swettenham, the British Resident of Selangor at the time. He was responsible for the street plan of what is now the older part of Kuala Lumpur City, and some of the landmark colonial heritage buildings were built during his time in office.

Years later, with the formation of the Federated Malay States in 1896, the states of Negeri Sembilan, Perak, Pahang, and Selangor were united under a central administration based in Kuala Lumpur. Vast infrastructure improvements followed, with new houses and roadways.

With more than 30 shopping complexes in the city center and several more in the suburbs, Kuala Lumpur is one of Asia’s great shopping paradises. All shopping complexes have car parks, food courts, restaurants, and fast food outlets. Promotional sales and other activities such as contests, product fairs, and live entertainment heighten the shopping experience. During the school holiday or festive season, it is the best time to snap up bargains.

Shopping is a must here, either in comfortable air-conditioned shopping malls, vibrant bazaars or even hawker stalls. Variety of goods with a price you can’t get it elsewhere.

What to buy in Kuala Lumpur, Malaysia
Among the items high on the shopping list of tourists are pewter, batik, duty-free items, electrical products, pret-a-porter attire, sportswear, and handicrafts.

A novel experience for overseas visitors is the night markets or ‘pasar malam’ which begin their trading activities in the late afternoon. These open-air markets feature hawker stalls that sell a variety of local produce, foodstuff, clothing, and cakes. Haggling is a common practice. Street artists and traditional medicine vendors are an entertaining sight here.

Kuala Lumpur is a delightful juxtaposition of old and new. Traditional Moorish building stands among gleaming state of the art skyscrapers in lush greenery that create peaceful oases. Kuala Lumpur has also been well known as the City of Light for its spectacular nightlife with colorful neon lights all over the cities.

Metropolitan Kuala Lumpur is a modern city of towering skyscrapers, famous landmarks, parks, and historical buildings. It is the capital of Malaysia and the hub of the country’s political, commercial, and social life.

The largest and most dynamic city, Kuala Lumpur also the home of the tallest building in the world and the tallest observation tower in South East Asia. But, amidst the spectacular structure, the soul of Kuala Lumpur is Malaysian with multi-cultures, sumptuous cuisine, and smiling faces at every turn.

The city offers an intriguing mix of cultures, colorful festivals, and a potpourri of local and international cuisine that is certain to please. Kuala Lumpur is a melting pot of cultures as manifested in the magnificent minarets of mosques, church spires, Chinese pagodas, and Indian temples. Chic cafes, fine restaurants, and hawker stalls thrive alongside each other, offering a spread of local and international delights. Kuala Lumpur is a visitors-friendly city where the smiles and warmth of its people are a part of Asian culture.

Visitors to Kuala Lumpur will be introduced to the world of discoveries, action, and excitement. Sights to be feasted range from colonial houses to gleaming skyscrapers and not forgotten the exotic tropical gardens.

Those who plan a holiday with their family should not miss the theme park that offers non-stop fun and adventure for their family. These what we call a city with nonstop entertainment, nightlife is exciting here in Kuala Lumpur, take your time to pubs, discos, karaoke, lounges, or nightclubs.

Kuala Lumpur is also important to Malaysia’s tourism as it is the gateway to other parts of the country. Kuala Lumpur International Airports ( KLIA ) served by more than 40 international airlines.