A dynamic town with modern telecommunications facilities, Labuan has been declared a federal territory as well as an International Offshore Financial Centre. 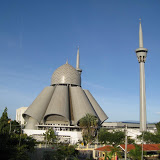 In Labuan, you can visit the colonial Botanical Gardens, World War II Memorial, the challenging golf course, and the world-famous wreck sites. Deep under the waters here lie a few shipwrecks dating back from World War II. Arrangements can be made with local travel agencies to explore these marvelous wrecks.

Lying only 8 km off the west coast of Sabah, Labuan can be reached by air from Kuala Lumpur and Kota Kinabalu.

Air-conditioned speedboat services are available from Sabah, Sarawak and Brunei Darussalam. Arrangements can be made with local travel agencies to visit the adjacent islands. Tourists can also take a high-speed ferry from Kota Kinabalu, Sarawak or Brunei to Labuan. The journey from Kota Kinabalu takes 2 hours while that from Brunei takes about 1 hour.

Labuan has had its own flag since 1990. For eight years prior to this, Labuan used the Malaysian flag. The Labuan flag consists of three alternating stripes of red, white, and blue, the colors signifying Labuan as a Malaysian Federal Territory. The red also denotes courage, the whites purity, and the blue unity. The crescent moon is the symbol of Islam and the 14-pointed star represents the states of Malaysia.

Labuan was part of the dominion of the Brunei Sultanate until 1846 when the Sultan of Brunei ceded it to the British. The discovery of large coal deposits and its strategic location led to the establishment of the island as an entreport on 1 August 1848. For the next 115 years, with a break of three years of Japanese military occupation, Labuan was under direct British rule.

Following the Japanese Occupation, Labuan became part of the British North Borneo colony (Sabah) on 18 July 1946. Labuan joined Malaysia in 1963 and on 16 April 1984, Labuan has declared a Federal Territory and ceded it to the Federal Government.

Besides being a major duty-free port, Labuan also has other tourist attractions like wreck diving spots, water villages, a War Memorial, golf courses, and the Peace Park. Of course, one cannot afford to miss out on the great duty-free shopping available on the island.