Situated on the southwest of Peninsular Malaysia with an area of 658 sq km, Melaka is the most historical state in Malaysia.

Melaka was founded by Parameswara, a Hindu prince banished from Sumatra, in 1400, Since then, Melaka had become an international seaport with merchant ships arriving from China, India, Middle East, etc.

Within the town are the ruins of St Paul’s Church, A Famosa, and numerous buildings and churches from the Dutch colonial era.

Tourists can also visit the Baba & Nyonya museum in the town to appreciate the priceless heritage of the ‘Straits Chinese’.

Other than structures of historical values, Melaka also offers a number of splendid beaches and islands such as Pulau Besar, Pulau Upeh, Klebang, Tanjung Bidara, Tanjung Kling, and Pantai Kundur.

Located 144 km from Kuala Lumpur, 244 km from Johor, and 290 km from Kuantan, Melaka can be reached by regular express buses from major towns on Peninsular Malaysia.

There is also a ferry service to Melaka from Dumai in Indonesia. 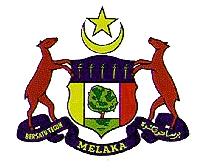 The various colors of the state emblem are the colors of Malaysia. This indicates Malacca as being a part of Malaysia. The five keris or swords represent five famous and brave warriors of ancient Malacca: Hang Tuah, Hang Jebat, Hang Lekiu, Hang Lekir, and Hang Kasturi. The crescent moon and star at the top center are the symbols of Islam, the national religion. The tree and two mousedeers symbolize the tale of Malacca’s founding. Parameswara had witnessed a fight between a mousedeer and a dog whilst resting beneath a Malacca tree. Impressed by the intelligence and prowess of the small-bodied mousedeer, he decided to set residence there and named it Malacca. The state motto reads “Unity is Strength”.

The colors blue, yellow, red, and white on the Malacca flag reflect the exact colors of the flag of Malaysia. This marks Malacca as a Malaysian state. The crescent moon and star are the symbols of Islam, the official religion of the state and country.

Malacca was founded in 1400 by an ambitious and aggressive Sumatran prince who hailed from Palembang, Parameswara. His impulsive takeover attempts of neighboring islands caused him to flee to Malacca, where he transformed the fishing village into one of the greatest resorts of the region. Displaying political savvy, he forged an alliance with the powerful Ming dynasty of China, securing the fledgling princedom from external threats, especially Siam. A political alliance with the state of Pasai in northern Sumatra introduced Islam to Malacca. It is believed that Parameswara changed his name to Iskandar Shah at this time. In the years following Iskandar’s death in 1424, Malacca continued to flourish, benefiting from its strategic location that facilitated the confluence of traders from many lands in the region. Culturally, it was to become a major diffusion center for Islam. Eventually, political turmoil, corruption, and graft eroded the Malacca Empire, and the final downfall came with the Portuguese Invasion of 1511 led by Alfonso de Albuquerque.

Portuguese conquerors ruled Malacca for 130 years. One of Portugal’s immediate actions was to build a fortress around the city. It was a sound move as Malacca came under frequent attacks by neighboring rivals Johor and Acheh. The constant presence of imminent attacks gave a sense of uneasiness to the kingdom. This impression was heightened with the suppression of Islam in the Christianizing of the port-kingdom.

Malacca’s reputation as the region’s principal entry port was gradually undermined by Batavia’s emergence as a main spice trading port. Dutch colonialists overran Malacca in 1641 after General Antonio van Diemen defeated Portuguese forces, but by then Malacca was subsequently reduced to an outpost, a point of tax collection, and a lay-by for ships.

At the end of the 18th century and early 19th century, British colonialists strengthened their position in the region, occupying Penang in 1786 and Singapore in 1819. The Anglo-Dutch Treaty of 1824 placed Malacca under them as well. In 1826, Penang, Singapore, and Malacca were grouped together under the Straits Settlements political unit.

Robert Fullerton was the first Straits Settlements Governor and was based in Penang. He reported to the British Governor-General in India. A Resident Consular governed Malacca and Singapore.

The Straits Settlements administration lasted until 1941 when Japanese forces attacked the Malay Peninsula. After the Japanese defeat, Malacca was placed under the British Military Administration from September 1945 to early 1946.

Malay opposition groups derailed the Malayan Union plan, and the United Malays National Organisation (UMNO) was formed under Dato’ Onn Jaafar’s leadership on 11 May 1946. The Malay Federation was founded on 1 February 1948 and on 31 August 1957, independence was declared.

Shopping in downtown Malacca can be an interesting and delightful experience, especially for those hunting for antiques and local products. Jonker Street, now known as Jalan Hang Jebat with its old-world ambiance is the perfect place to shop for antiques, authentic collectibles, and artifacts. One can find just about anything from rare coins to replicas of ancient silver and brassware, restyled ceramics of an ancient Chinese era, old Victorian furniture, and even jewelry boxes inlaid with mother-of-pearl.

Malacca is known as the ‘Historic City’, its name befitting Malacca’s reputation as a cornucopia of historical sites. Besides that, recreational forests, museums, and beaches add to Malacca’s stance as a major tourist attraction. Amongst the more notable Malacca landmarks are the Malacca Sultanate Palace, A’ Famosa, the Stadthuys and St. Paul’s Hill.