Archaeological findings indicate that civilisation in Peninsular Malaysia (Tanah Melayu) dates back to in the New Stone Age (Neolithic Period). The Hoanbinhin civilisation thrived between 2000 BC and 1500 BC. Handmade metal artifacts used by the Proto-Malays and Deutero-Malays have been found in Pahang, Perak and the coast of Selangor.

Early Malay kingdoms, namely Langkasuka (Kedah), Srivijaya (Palembang), and Majapahit (Java) were in existence since the 9th century. But it the emergence of the Malacca Sultanate in the 14th century that is widely held to mark the begining of the history of Malaysia. The Islamic empire of the Malacca Sultanate covered the entire area of Peninsular Malaysia and the eastern coast of Sumatra and Brunei. Malacca’s widespread fame as a port for East-West trade caught the eye of European trader. The encroachment of Western powers began with the Portuguese conquest of Malacca on 24 August, 1511; and later by the Dutch in 1641.

Following the fall of the Malacca Suttarate, new independent states emerged throughtout the Peninsula, beginning with Johore in the mid-17th century; Negeri Sembilan and Terengganu in the early 18th century; Kelantan in 1764; Selangor in 1766; Perlis in 1843; Pahang in 1881 and Johore in 1885. By the end of the 19th century, there were 9 Sultans in power.

The mid 18th century saw British intervention in the Malay Peninsula as free traders established trade ties with the Malay Sultans. They eventually set up trading ports and took over Pulau Pinang (1786) and Singapore (1819).

With the ratification of the Anglo-Dutch Treaty in 1924, the British tightened their grip on the Peninsula. They established the Straits Settlements in 1826; the Federated Malay States in 1896; and acquired Kedah, Perlis and Kelantan from the Siamese through the Bangkok Agreement of 1909. The states of Johore and Terengganu were coerced to accept the services of British advisers in 1914 and 1919 respectively. 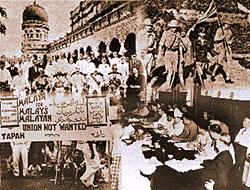 The British introduced an export-based economic system that superseded trading and self-sufficiency. This eventually led to a large influx of immigrant workers from China and India. By the dawn of the 20th century, the foundations had been laid for the present societal structure.

In February 1942, Japanese forces invaded and subsequently occupied the entire Peninsula. Following the Japanese surrender on 14 August 1945, the return to British administration saw the adaption of new policies, and the Malayan Union arrangement was put in place of the Federated and Unfederated Malay States. The creation of the Malayan Union reduced the status of the Malay rulers, which, coupled with the watering-down of citizenship eligibility regulations, translated into the loss of Malay rights.

The Malays came out in force to oppose the April 1946 formation of the Malayan Union. Malay associations came together to form the nationalist United Malays National Organisation (UMNO). The British were consequently compelled to abandon the Malayan Union and, subsequently, the Federation of Malaya comprising all the states of the Peninsula was established on 1 February 1948.

In 1955, Federal Elections were held to elect 52 members to the Federal Legislative Council. Efforts towards self-government started in early 1956 via pre-independence conferences in London and the establishment of the Suruhanjaya Bebas Perlembagaan (Independent Constitutional Commission). Independence was achieved 31 August 1957.

In September 1963, Singapore, Sabah and Sarawak combined with the Federation of Malaya to form Malaysia. However, Singapore later broke away to become an independent state on 7 August 1965.

Click here for our next article about The Malaysian Flag.