Malaysia is home to some of the world’s most exciting cuisines. Here, you can try the exotic Malay, Chinese or Indian fare, each with its distinctive flavors and styles. Besides, there are also cuisines derived from a meeting of different cultures, such as the Nyonya and Indian Muslim foods.

As Malaysia is a highly open country, continental and Mediterranean cuisines are also available here. Indeed, Malaysia is a place where the oriental and western cultures meet.

In the national capital Kuala Lumpur, visitors will find themselves pampered with a wide selection of eateries, ranging from traditional hawker stalls to chic hotel restaurants and sidewalk cafes, as well as western chain restaurants.

Spices and coconut milk are the usual ingredients found in Malay cuisine. The Malay cuisine itself varies from region to region, with the Kelantanese cuisine emphasizing sweetish taste due to the liberal use of coconut milk and sugar, not unlike the Thai cooking while Kedah food is spicier owing to the Indian influence since centuries ago. 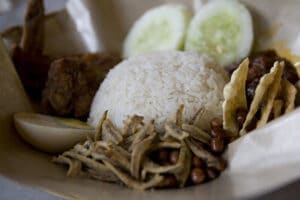 The most famous among tourists, however, is the satay, or skewed meat marinated in spices and grilled over a charcoal fire. It is served with peanut gravy, rice cubes, cucumber, and onions.

Nyonya or Peranakan cuisine is a unique blend of Malay and Chinese cooking styles characterized by sweet, sour, spicy, and pungent flavors.

Indian foods are generally spicy due to the generous use of chilies and spices. Indians also love yogurt after a meal. The less spicy alternatives are Kurma (mild meat curry) and tandoori chicken (chicken baked in clay oven). Southern Indian cuisine is in general hotter than Northern Indian and Moghul foods while Indian Muslim cuisine includes fish-head curry, Murtabak, and mee Goreng.

Mamak dishes are truly Malaysian style available throughout the country. Mamak stalls of restaurants are particularly popular among Malaysian with the wide range of food where some outlets are open 24 hours a day. Some of the must-try are Nasi Kandar (rice served with its special side dishes), Roti Canai (thin crust bread served with curries), and Teh Tarik (unique Malaysian tea).

Seafood dishes are found in abundance in coastal fishing towns all over the country.

Click here for our next article about Kuala Lumpur International Airport.