The largest state in West Malaysia, Pahang covers an area of 35,960 sq km with a population of about 1 million. Kuantan is the state capital while Pekan lying 45 km away is where the royal family resides.

Pahang offers a lifetime experience of endless excitement, with its pristine forests, idyllic fishing villages, and white powdery beaches. The state is also home to the longest river on the peninsula, Sungai Pahang, and its highest peak, Gunung Tahan.

There are also regular air-conditioned coaches plying between Kuantan and other major towns in West Malaysia. 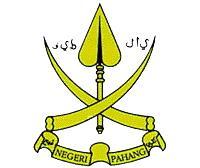 Black and yellow are the colors of the Pahang state emblem. Yellow is the royal color and black denotes the rakyat. The head of the spear is a symbol of the Sultan’s sovereignty.

The Pahang flag comprises two equal horizontal stripes of black and white. The white, which is above the black, represents the Ruler and the black denotes the rakyat.

Pahang was under the rule of several regional powers. It was a vassal state of Siam in the 14th century. Pahang became a distinct political entity during the Malacca Sultanate, circa 1454; Raja Muhammad, the son of Sultan Mansur Syah, was made its sultan in 1470. Following the downfall of the Malacca Sultanate, the Johor-Riau Empire had a stronghold over Pahang. It then became a fief of the Bendaharas of Johor-Riau by the beginning of the 19th century.

A civil war in the middle of the 19th century resulted in Bendahara Wan Ahmad proclaiming himself Sultan. However, British interest in Pahang’s mineral resources and the British movement in the Malay Peninsula forced Sultan Ahmad to accept a British Resident in 1888.

In 1896, Pahang became one of the four Federated Malay States; this lasted until the Japanese invasion in 1941. It came under the British Military Administration (BMA) in 1945 upon the surrender of the Japanese; the Malayan Union comprising Pahang, nine other Malay states, Penang and Malacca was formed in the same year. In 1948, it became part of the Federation of Malaya which later achieved independence on 31 August 1957.

There are more than 20 places of interest in Pahang, including resorts, historical buildings, caves, and islands. Pahang is the largest state in Peninsular Malaysia and is home to Gunung Tahan, the highest peak in Peninsular Malaysia, and Taman Negara, Malaysia’s largest national park. The main hill resorts, Fraser’s Hill, Cameron Highlands, and Genting Highlands can also be found here. Pahang is also a shopper’s paradise with its handicraft centers offering items like wood carvings, brocades, shell craft and batik cloth.