Located on the northeast of Borneo, the state of Sabah, one of Malaysias’ States, is endowed with towering mountains and lush equatorial rainforests. Being just south of the tropical typhoon belt, Sabah is also known as the “Land Below The Wind”.

The population of Sabah comprises over 30 different ethnic groups, each with its own traditions and colorful festivals. 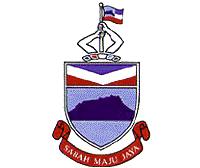 The red stripe represents courage and the willingness to sacrifice for the state of Sabah. White is the color of purity while dark blue is the color of peace and prosperity. The light blue denotes Sabah’s status as a young state. The silhouette of Mount Kinabalu is the symbol of the unity of the people.

The red stripe represents courage and the willingness to sacrifice for the state of Sabah. White is the color of purity while dark blue is the color of peace and prosperity. The light blue denotes Sabah’s status as a young state. The silhouette of Mount Kinabalu is the symbol of the unity of the people.

Human settlement began in Sabah or North Borneo 27 000 years ago. The kingdom of Brunei took control of Sabah’s west coast in the 16th century while the Sulu Sultanate controlled Sabah’s east coast in the 17th and 18th centuries.

British encroachment started with the occupation of Balambangan Island by the British East Indies Company. In 1764, the Sultan of Sulu was forced to concede his power over Sabah territories to the British. The British also installed Raja Muda Hashim as the new Sultan of Brunei after a succession struggle for the throne of Brunei.

Brunei’s control over Sabah diminished by the 19th century. In 1850, an American trader, Charles Lee Moses, succeeded in obtaining a lease over a large part of the west coast from the Sultan of Brunei. This eventually passed into the hands of Alfred Dent, a British businessman. Dent converted the lease into a cession. In 1870, William Cowie and Baron Overback persuaded the Sultan of Sulu to hand over his concession in Sandakan.

By 1878, both Brunei and Sulu had delivered all their Sabah territories to the British. In 1879, the British established administrative capitals at Sandakan, Temparuk, and Papar. In 1881, the Chartered Company of British North Borneo was established to manage the procurements, with W.H. Treacher as the first Governor of Sabah. British Government protection was also granted.

This lasted until 1941, the year of the Japanese invasion. Following the end of the Second World War, Sabah was placed under the British Military Administration (BMA). In 1946, the Company surrendered its rights to the British Government and on 15 July 1946, Sabah became a British Crown Colony.

Sabah eventually obtained its independence by joining Malaysia in 1963, after Tunku Abdul Rahman allayed its fears of domination by the Federal Government. The findings of the Cobbold Commission in 1962 found over 70% of the population of Sabah and Sarawak favored joining Malaysia, and on 31 August 1963, the Federation of Malaysia with Sabah and Sarawak was formed. Both the Philippines and Indonesia challenged this development. But Malaysia was formally formed on 16 September 1963.

Sabah is renowned for Mount Kinabalu, the highest mountain in Southeast Asia. It is also home to some of Asia’s best beaches, islands, and marine life. Sabah’s jungles house the world’s largest Orang Utan Sanctuary and have unique flora and fauna. Tourists can also visit longhouses where traditional lifestyles are still practiced.

Natural Attractions
Kinabalu Park
Kinabalu Park showcases a complete and interesting ecological system unrivaled anywhere else in the world. One can experience the tropical rainforests, the mountain, and alpine forests, all in one place. Chalets, lodges, and hostels are available within the park.
Gomantong Caves
The Gomantong limestone caves, once accessible only by a stream of the Kinabatangan River, have been harvested for the valuable bird’s nests for centuries. The harvesting of bird nests is today regulated by the Wildlife Department.
Sepilok Orangutan Rehabilitation Centre
In the Sepilok Orangutan Sanctuary, visitors can come in close contact with the “man of the forest”. 25km from Sandakan, the 43 sq km sanctuary was started in 1964 to help the once captive orangutan learn to fend for themselves in the wild
• Danum Valley
• Whitewater Rafting – Papar River, Kiulu River, Padas River
• Signal Hill