Terengganu is one of the most charming states in Malaysia with its sandy beaches, picturesque islands, lush virgin tropical forests, quaint fishing villages, dazzling waterfalls, etc.

Besides a wealth of natural wonders, Terengganu is also renowned for its batik printing and songket weaving industries and colourful festivities, cultural and traditional heritage.

State capital Kuala Terengganu is a quiet town devoid of the hustle and bustle typical of any city.

Terengganu is known for its pristine beaches and picturesque islands. The turtle sanctuary at Rantau Abang is a well-known tourist magnet. It is also famous for its batik printing and songket weaving industries. Bargain hunters will have a field day with batik cloth, songket, woodcarvings, handcrafts, woven goods, silverware and brassware waiting to be bought. Weekend markets are also another attraction for shoppers.

Kuala Terengganu is 491 km from Kuala Lumpur and 555 km from Singapore by road. Express buses and taxis ply between Kuala Terengganu and other major towns on West Malaysia.

Both Malaysia Airlines and Pelangi Air offer regular flights from Kuala Lumpur to Kuala Terengganu and Kerteh, 100 km to the south. 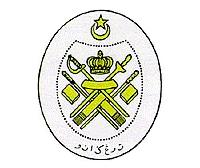 The crescent and the star at the top represent Islam. The crown denotes the Ruler’s sovereignty. The sword, long keris and mace are symbols of the State’s authority. The book on the right symbolises the Holy Quran and the book on the left the kitab. The kain dukung denotes Malay royalty.

The white background denotes the Ruler and the black field represents the people; the white surrounding the black signifies the protection of the Ruler over his subjects. The crescent and the star represent Islam, the State religion.

he present Sultanate of Terengganu had its origins in 1726. Sultan Zainal Abidin I, from the family of the Pahang Bendahara, was the first ruler. His successor, Mansur Syah, played a vital role in checking the influence of Bugis outsiders in the region.

In the subsequent years, the Siamese started to impose its sovereignty over Terengganu with the Sultans sending tributes (in the form of Bunga Emas) to Siam until 1909. In July 1909, the Anglo-Thai Treaty of Bangkok saw the British wielding its power over Terengganu. However, Sultan Zainal Abidin III rejected this treaty; a friendship treaty was later ratified and this paved the way for the appointment of an agent of the British Consul-General. Terengganu was finally persuaded to accept a British adviser, J.L. Humphreys, in 1919.

The Japanese Occupation (1941-1945) resulted in Terengganu being handed back to Siam. In September 1945, Terengganu was placed under the British Military Administration.

In 1945, together with Penang and Malacca, and 9 other Malay states, Terengganu joined the Malayan Union. In 1948, it joined the Federation of Malaya, which later achieved independence on 31 August 1957.

The beautiful Lake Kenyir is a fishing paradise, while Sekayu waterfall and its 7 other smaller waterfalls are an instant hit among nature lovers.

Besides, the state is also renowned for its cottage industries. Among the traditional handicrafts made in the state are Kain Songket, Batik, copperware, mats and basketry.

60 km south of the state capital Kuala Terengganu, Tanjung Jara and Rantau Abang are two of the many popular seaside resorts in the state. Rantau Abang is also famous internationally as one of the few places in the world where giant leather back turtles make annual trips to the shore to lay eggs.