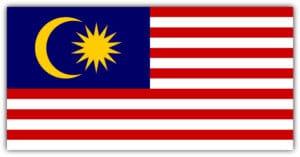 The dark blue canton in the upper left quarter symbolizes the unity of the Malaysian people.

The crescent moon in the dark blue canton is the symbol of Islam, the official religion of Malaysia.

The 14-pointed star stands for the unity of the 13 states and the Federal Government.

History of the Flag
The Malaysian flag is an adaptation of the flag of the Federation of Malaya. The original flag design was selected via a national competition organized by the Federal Legislative Council.

Three hundred and seventy three (373) entries were submitted, and only three designs made it to the final round.

The first design featured a pair of keris criss-crossed at the centre, surrounded by 11 five-pointed stars.

The third design had red and white stripes with a yellow crescent moon and star on the left.

The Federal Legislative Council selected the third design after a public referendum organized by a local newspaper.

The Council of Rulers approved the final flag design on 22 and 23 February 1950. On 19 April 1950, the Federal Legislative Council passed a motion proposed by the then Acting Chief Secretary:

“That in the opinion of this Council, the Flag of the Federation of Malaya should be as follows: Fourteen horizontal stripes alternately red and white in colour, the uppermost stripe being red, having a blue quarter with a crescent and eleven-pointed stars in yellow superimposed, the standard size of the flag to be six feet by three feet.”

With to the formation of the State Malaysia on 16 September 1963, the design of the Malaysian flag was altered to incorporate 14 stripes and a star with 14 points, representing the 14 states of Malaysia, including Sabah, Sarawak and Singapore.

Although Singapore withdrew from Malaysia on 9 August 1965, the stripes and 14-pointed star were retained to indicate the union of the 13 states and the Federal Government.

The official name of the Malaysian flag Jalur Gemilang (Stripes of Glory) was announced by Prime Minister Dato Seri Dr. Mahathir Mohamad in conjunction with the 40th National Day celebrations in 1997 .

Click here for our article about the Coat of Arms of Malaysia.